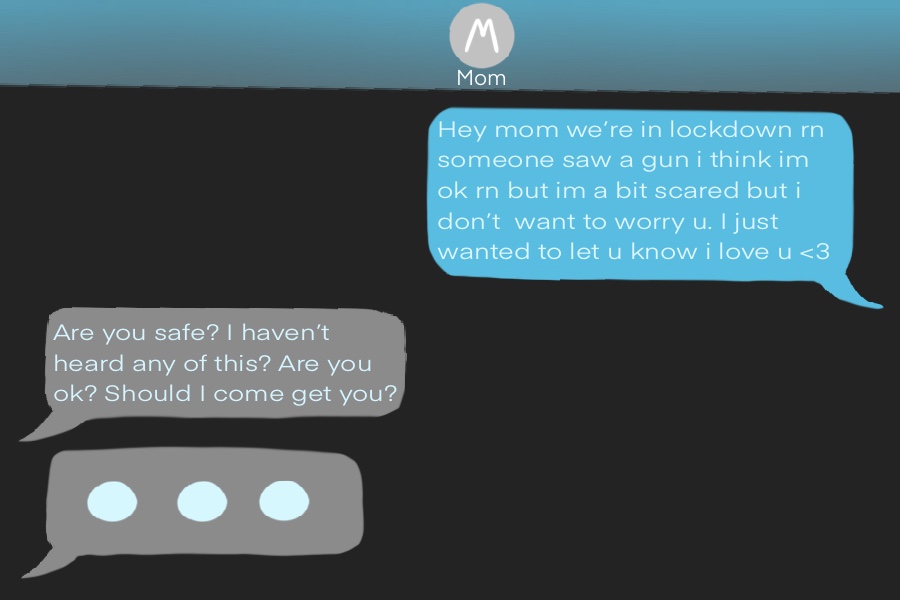 How should we respond in a crisis?

“I wasn’t thinking about being afraid. I was thinking about protecting these kids,” school ceramics teacher Ms. Grove told Tattler staff. On Wednesday, September 14th, rumors of a gun on campus spread like wildfire. The building was put on immediate lockdown, and no one knew the details or severity of the situation.
Ms. Grove wasn’t going to take any chances. She took her students to a back room in the art studio, surrounded by clay and pinch pots, and had them barricade the door. “I had a weapon in my hand. A big rolling pin,” She mentioned. “If it sounds foolish later, I don’t care. Because if you get caught unprepared, there’s no second chance.” Ms. Grove’s immediate jump to action was just one of the reactions schoolwide during this lockdown.

I had a weapon in my hand. A big rolling pin”

As the singular authority figure in a room of thirty-plus children, a lot rests on the shoulders of teachers, especially when it comes to the threat of a weapon. While B-CC was lucky the threat never put teachers in a position of real danger, or in a situation to put the students over themselves, what is the correct response when confronted with safety threats? How much do we ask of our staff?
“That is the most stressed I’ve ever been.” Dr. Mooney said, when prompted about the initial report of a weapon, and calling the lockdown. “Teachers have told me they can hear it in my voice,” Dr. Mooney noted, “compared to how I normally make announcements.” Many recall his shaky, out-of-breath voice over the loudspeakers. Mr. Hall shared that by the time the message was over, “it [was] abundantly clear to me that this was a real lockdown.”
“I spent, honestly, the first 10 minutes, as horrible as it sounds, just listening for gunshots,” said Mr. Hall. “I was wondering, what if I do hear something out there that I don’t want to hear? Will I be ready? If someone comes in this room?”

“I spent, honestly, the first 10 minutes, as horrible as it sounds, just listening for gunshots”

“I think that in those moments, it’s the teacher that sets the tone…the emotional tone. And what I wanted to convey to students was calm and be ready for anything. So I didn’t freak out.” He said. But that doesn’t mean those worst-case scenario thoughts didn’t plague him- despite what he tried to establish for his students. The hour lockdown- felt much longer, and in the silence, there was lots of time for doomsday thinking.
“I’ve been a teacher for almost two decades. I guess this is finally it.” He said simply.
The possibility of danger stirred different emotions in all. “I wasn’t terrified,” said Ms. Mahoney, “and I don’t think that that was because I felt safe, I think it was because we all process differently.”
Mr. Zehner was one of these individuals. Longtime B-CC member, student, and now seasoned teacher, when prompted on his initial thoughts of the lockdown he shared, “I did not feel [scared]. We’ve had other lockdowns in my life here for a lot of things so I didn’t immediately go to what other people seemed to go to.”

I said, listen, you know, have a lollipop, make sure your phone’s on silent, make sure no one’s talking”

Mr. Milstien didn’t either, but for different reasons. Just before 5th period, he heard a rumor in passing suggesting the possibility of a lockdown, which ultimately kept his worry to a minimum. In efforts to relay these feelings to his students, he recalled, “I had actually got some lollipops, and just handed out lollipops to everybody and I said, listen, you know, have a lollipop, make sure your phone’s on silent, make sure no one’s talking.” In the health room, Ms. Marmillot sat next to the medication, wondering how to grab them if evacuation became necessary. Personal safety was a lesser point of worry, instead, she shared, “I’m thinking about the students having anxiety. And those who are diabetic, what if they are low because they feel so stressed and don’t have any [medication]? What’s the plan for that?”
More than an hour after the first announcement, B-CC shifted from a lockdown to shelter in place. It was at this point that much of the tension throughout the school started to ease. However, among staff, there were similar sentiments shared about the rest of the afternoon.
“I felt more after it was over than before,” explained Mr. Soboslay. “I had the usual things to do for school, to get ready for the next day, and I didn’t feel as motivated to do those things…I was exhausted.” Mr. Hall agreed: “I went home and laid on the couch for 10 hours. And that’s all I could do.”

No matter what reaction you had, it’s important to take a step back and recognize how you felt, how others felt, and how you can practice a little more compassion for those around you. On the day of the lockdown, some students laughed or cried. Some frantically texted parents, others simply stayed quiet. Some turned to the company of classmates, while others coped with humor and social media posts.
Is any single reaction correct? Not really. When the situation is wrong, how can we expect to know, much less have, the correct response?

View Comments (1)
Donate to The Tattler

Your donation will support the student journalists of Bethesda-Chevy Chase High School. Your contribution will allow us to purchase equipment and cover our annual website hosting costs.